In the fall of 2020, local audio recordist and musician Alan F. Jones waded into the cold waters of Curley Creek with a microphone in hand and the goal of capturing the “acoustic fingerprint” of a Kitsap salmon stream. The resulting recording is intimate and specific; a soundscape with all the nuance of a landscape painting if one is willing to listen close. In a follow-up interview about the project, Alan introduces the field of acoustic ecology and its potential use as a monitoring tool in land preservation and restoration work. You can listen to Alan F. Jones’ recording HERE, and his interview with Great Peninsula Conservancy HERE. A transcription of the interview is available below.

GPC: Tell us a little about yourself.

Alan F. Jones: Hi, I’m Alan Jones, I am an audio recordist, phonographer, and my background is in acoustics. Specifically, underwater, undersea acoustics. That career field which I worked in for many, many years has spread into a new hobby and passion and that is what a lot of people call acoustic ecology.

I’m out here at the Curley Creek Tyner Preserve. It is one of the many enormous tracts of land that is taken care of by the Great Peninsula Conservancy. They are the stewards, the custodians, and the oversight for pristine areas on the peninsula. Our interest here today is the salmon, they are just beginning to run out here at Curley Creek. You’ve seen them in other parts of the county for the last couple of weeks, but they are just beginning to show themselves here in Curley Creek. We’ve even seen a dead salmon, which is natural. The salmon come up here to spawn and to die. The fact that we’ve only seen one of them means it is pretty early on in the season here at Curley Creek.

GPC: Tell us a little bit about your project here out at the Curley Creek Tyner Preserve.

Alan F. Jones: What I’m interested in is what we call the acoustic footprint of a given area. If you begin to zoom in on any part of that footprint, you get what we call an acoustic fingerprint. So we have a macro area and then very specific sounds unique to a specific site within that greater area. I’ve been coming out and surveying this creek to prepare for what we are doing today. My goal is to get both the acoustic footprint – which includes the local ecology and how the different beings and critters and flora interact – I’m trying to capture that acoustically. You’re more likely to see videography and photography of those things, but the acoustics of an area are also very important and can tell you a lot of things. Zooming in, we have an array of microphones that are staged about 50 yards from me. We have hydrophones that are suspended in water to capture the sounds of salmon going by. And in addition, we have outdoor open mics that are capturing sounds, at the same time, that you are hearing in and around the area. Over time you may be able to collect enough information to acoustically capture what makes a salmon freak out. Right? Sometimes it will be something in the water column, another salmon passing by, or sometimes it will be a predator. The first part of the project was to capture video and audio, with a shotgun microphone and a suspended hydrophone within the water column in a really dark area under a thick log. To me that is interesting because salmon tend to like dark places. Their eyesight can sense changes in light. If they are hanging out and resting in a given spot they are in a key spot optically to look for predators, like a guy with microphones creeping up the creek. Other than that, we are also recording an array of above water sounds like the salmon splashing around which you may be able to hear over there in the background.

GPC: Can you tell us a little bit about acoustic ecology?

Alan F. Jones: I’m going to be on the hook for explaining differently than the next person, or the next person after them, but what I love about acoustic ecology is that it blends art, activism, awareness and science all together in the interest of ecology management, conservation, preservation and primarily to capture what many of us feel is a waning acoustic fingerprint that is coming about not just because of things like climate change, which has a dramatic impact, but also things like consumerism, capitalism, and the way that the expansion of business and fortifying land that should otherwise be pristine, is affecting local ecologies miles and miles out. Eighty years ago we weren’t able to do this – to come out to place like Curley Creek and capture all of the sounds in a given month under certain weather conditions and have that in our pocket as a kind of photograph. And if need be, we have this data to use for comparative analysis 30 years from now if they build an Amazon warehouse in Port Orchard. How does that change the environment, the local ecology. Many of those data points can be picked up by studying the occurrences that happen acoustically in these areas… I’m just really nerdy about this stuff…

GPC: I really love that this data gives us a unique look at a site that not many of our members have been to.

Alan F. Jones: The objectives of acoustic ecology. “It’s hardly changed” is a good feeling. It is a good feeling for us as community to see the results of preservation. To go back to the photograph analogy – there are places where you and I grew up, in separate places, that we can in advance of visiting can get really excited about. But upon getting visiting, there’s now a strip mall where there was once a stable and a long stretch of country road. We miss those things. We miss those things in our ears. Parts of the environment that make up certain parts of our own individual chapters in our lives. Preservation and conservation and, specifically, these different manners of documenting are so important not just to bring those things to others, but also to rally a growing group of people who can do something to pump the breaks on expansion and building and especially near wetlands and environments like this.

GPC: How does being a musician affect this work?

Alan F. Jones: I wouldn’t say that is does so deliberately or consciously. It feeds into an interest in listening or what they call causal listening. The fact that so many environmental sounds have a different range to them – different tempos different timbres. You stumble across a great amount of detail. In the composing world, when you are in the workshop, when you are in the laboratory putting pencil to paper and sitting at whatever instrument you are looking for the same things. Things that are interesting, things that blend together, and it doesn’t have to be in traditional ways. There can be atonality. There’s atonality all throughout just this area that we are sitting in right now. The processes for me in the capturing of these sounds are so very similar that it influences the way that I make music. There is often a tremendous amount of fusion of site specific recordings, those lines in the fingerprints, that will make it into my own music. It becomes foreground in at least half of what I do. Whereas other forms of conventional instrumentation lies just underneath the surface. So I think there is a kinship between those who love music and like to listen to it for their own reasons  and investigate and dig deeper in to the how and the fascination of it. Very much the same in acoustic ecology, what we’re trying to do is raise activism and raise awareness about the things that are happening throughout the world. And when done really interestingly it can be done in a really artistic way. There are many practitioners that are doing exactly that, coming at it from an aesthetic field first and then collaborating with the science community. I’m a little different, I come at it purely from a scientific interest, but that is so at play with my other interest which is music and composition.

GPC: What other sorts of projects have you worked on?

Alan F. Jones: What I’m doing here at Curley Creek Tyner Preserve is a natural extension of other projects that I’ve been working on for years. One of my recently completed projects is the capture of a ferry underwater as it changed its positioning, as it shifted from its main propulsion to its positioning propulsion, and the utter pollution, noise pollution to be specific, that stems from ferry traffic and merchant traffic in a given area. And the effect that that has on the gray whale community that hangs out in the sound and up into the Strait of Juan de Fuca. Another one, very similar, but this time focused on humans and plight was the recording of physical surfaces in the Japanese Internment Memorial on Bainbridge Island. That was a deeply important project to me because it was something that I’d been thinking about for many years. But I think what I’m most excited about is the one that I’m working on with GPC, and the partnering that we have ahead of us after salmon season to go tackle something else. To go record interstitial waterways riparian areas, and wetlands. My dream project is to record before and after a dam removal.

GPC: Any parting thoughts to close us out, Alan?

Alan F. Jones: I also want to emphasize that you do not need a degree or any super fancy equipment to go out and do this type of thing—in fact it is very important for amateur recordists to get out there and do exactly this. To come up with ideas and things that make you tick and get out there and record them and share them with the community. It may become a data source for  the science and educational community.

GPC: Thanks, Alan! Any last salmon jokes to end us on?

Alan F. Jones: You are very welcome. I wish I did… I would really be hedging a “roe…” 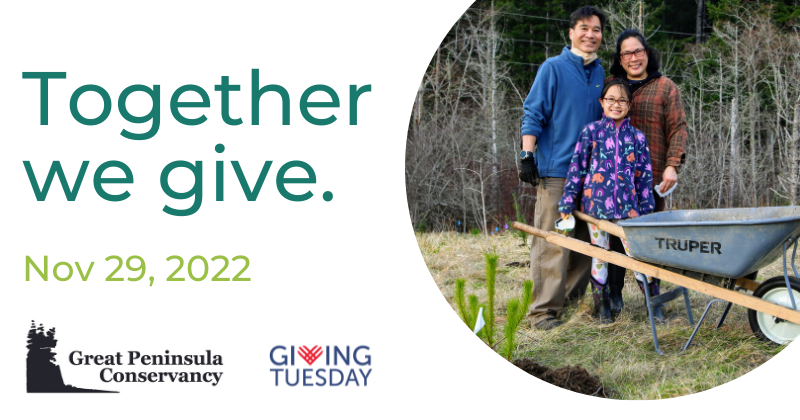 Join in the spirit of giving and make your donation today. Your gift before December 31st will be matched dollar for dollar to protect land, restore habitat, and connect people to nature!