What you need to know about Gary

For half a century, Gary Cunningham led the way for conservation in the Puget Sound region. In 1969, Gary was a founding member of Hood Canal Environmental Council, and served on the board of this all-volunteer group for 48 years. In 1989, Gary founded Kitsap Land Trust, one of the four all-volunteer land trusts that merged to form Great Peninsula Conservancy in 2000. Gary led the merger with the goal of pooling resources to hire staff and to ensure the sustainability of the organization. In addition to serving as GPC’s first President, Gary also served terms as Vice President, Secretary, Treasurer, and additionally, as a pro bono attorney for GPC for 15 years. Assisting in everything from real estate transactions, to negotiating and preparing conservation easements, it is impossible to tell the story of GPC without Gary as a key player. In addition to his gifts of time and creative vision, Gary and his wife Marilyn have also made significant financial contributions to GPC over many years. Despite his battle with ALS, Gary continued to serve GPC as a member of the Conservation Committee until his passing in the summer of 2020.

In the spring of 2020, GPC staff recommended that the name of the GPC Conservation Award get an update. After a unanimous vote of approval from the GPC board, the award that Gary himself had won in 2017 was renamed in his honor.  The Gary Allen Cunningham Conservation Award will continue to recognize a partner or volunteer who has made a significant contribution to GPC’s mission, and be presented at GPC’s annual fundraising event. Although GPC members were unable to gather at Spring Dinner this year, the award will be presented on October 1st at GPC’s 20th Anniversary Virtual Celebration.

Former Recipients of the Conservation Award:

The 2021 recipient of the Gary Allen Cunningham Conservation Award 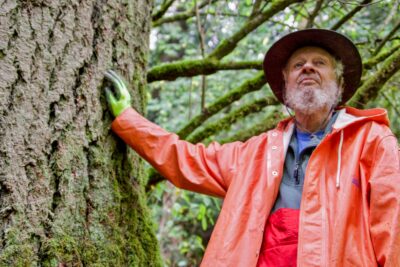 Art Schick has lived in Brownsville since 1941. A graduate of Central Kitsap High School and Olympic College, he received a B.S. in Forest Management at University of Washington. Art worked in forestry for The State of Washington, U.S. Forest Service and Northern Pacific Railway before taking the Base Forester position at Naval Sub Base Bangor. He has also taught forestry and plant subjects at North Idaho Community College and at Olympic College. During 30+ years at Bangor the forest responsibility enlarged to Natural and Cultural Resources Management, including groundwater resources. When Art retired from Federal Service in 2000 he joined the Natural Resources staff of the Suquamish Tribe as Water Resources Manager until his 2007 retirement. In 2010, Art began serving on Great Peninsula Conservancy’s board of directors and since then has contributed significantly to GPC’s work as board president (2014-2016), as a member of both the conservation and stewardship committees, and as a volunteer steward for multiple properties. Just last year, Art Schick went door to door seeking neighbor support for the preservation of what is now GPC’s Burke Bay Preserve. Art’s efforts are the reason why GPC was able to close the project having met its $40,000 fundraising goal to support ongoing site stewardship! Art’s wife, Barbara, and his daughters and grandkids share his outdoor interests and have joined him in hiking, backpacking, boating and bird watching. A long time interest in historical subjects has led Art through restoration of two Model T Fords. His current project is restoration of a 1911 Baker Electric horseless carriage. Thank you, Art, for your ongoing contribution to GPC’s mission and vision.