On April 29, thirty people showed up in the Banner Forest Heritage Park’s parking lot at the head of the trails for an exciting morning spent examining the forest floor for mosses and lichens. Leading the Moss & Lichen Walk & Talk was GPC’s own 2020 Volunteer of the Year, John Foltz. John is an artist, rock climber, naturalist with a vast knowledge of the Pacific Northwest’s mosses and lichens, and a steward of Banner Forest.

At the beginning of the Walk & Talk, people were invited to check out the example specimens labeled and placed in bowls on a table at the head of the trail. 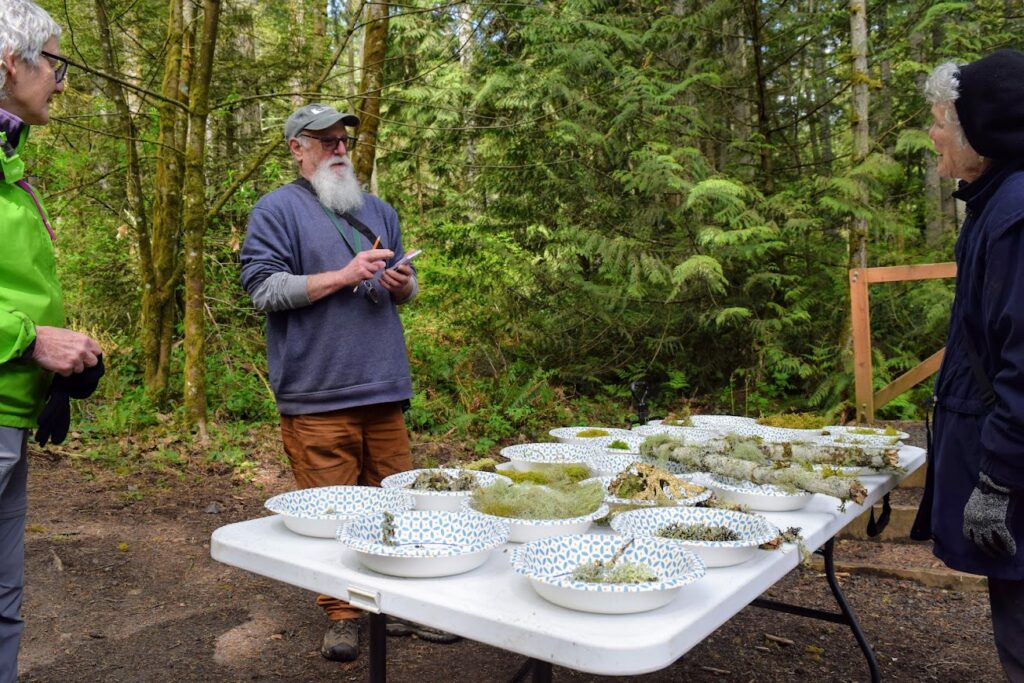 Together, John Foltz and GPC staff then took the group out for a casual stroll through the forest to hunt for different moss and lichen species that people could find on their one-page field guide made specific to Banner Forest. As John Foltz would stop to show the group a new species, some people took notes on the physical traits of the species, whether it was found on rocks on the ground or growing on a tree trunk, while others gathered around and absorbed the vast amount of knowledge John had to share with everyone. While exploring the forest, some people also expressed an interest in the mushrooms and different tree species that the group came across as well.

During the walk, visitors learned about how mosses are slow growing plants that belong to the bryophyte group. John Foltz demonstrated how you can gently pick up a moss to examine it closely then put it back where it will keep on growing! This is because mosses do not have any roots, which allows them to grow on almost any surface. Jaime Webb, GPC Education Coordinator, discussed with part of the trail group about the growing use of native mosses as ornamental plants and nitrogen fixers in people’s gardens and lawns.

One of the highlighted finds for many people was the Stair Step Moss you can see Jaime holding out for people to see below. This unique moss grows in a pattern resembling stair steps as the common name suggests. Some of the other mosses learned about during the walk included cat-tail which drooped out of the tall conifers, curly thatch growing in soft ball shapes hanging off of tree trunks, and Oregon beak with its feathery appearance.

Like the mosses, lichens are also an organism that does not have any roots, however, the resemblance ends there. Lichens are actually 3-4 organisms existing together through symbiosis. The process of a fungus finding an alga, cyanobacteria, and often also a yeast to form a partnership with is called lichenization. Lichens can be found anywhere on earth aside from the ocean and are successful slow growers which can live for hundreds of years.

When coming across some beard lichen, John demonstrated the inner cord that can be seen when stretching out the lichen, differentiating it from the witch’s hair lichen. After coming across the tube lichen, people took note of the black underside and how the inside of the lichen is hollow. John also pointed out that every bit of green or white color on many of the trees is actually some type of lichen. The Walk & Talk participants glanced up at the trees, seeing them in a new light. One person asked if the lichens and mosses are ever parasitic or harmful to the trees. The answer is no, they’re simply hanging onto the trees to access more sunlight, which doesn’t harm the trees at all. The group also talked about the benefits of moss to absorb excess storm water in urban areas.

Despite not traveling very far through Banner Forest, the Walk & Talk group soon loops back around to the beginning of the trail where people can try out their new identifying skills at the table full of moss and lichen displays.

While many moss and lichen species cannot be told apart without the use of DNA and microscopes, there are still many species that can be identified while out exploring in the parks or in your very own backyard.