The cherry trees have finished dropping their petals, but many other flowers are just getting started! You can find all sorts of native species on GPC preserves that are just beginning to blossom – so enjoy the springtime and get outside to see some! 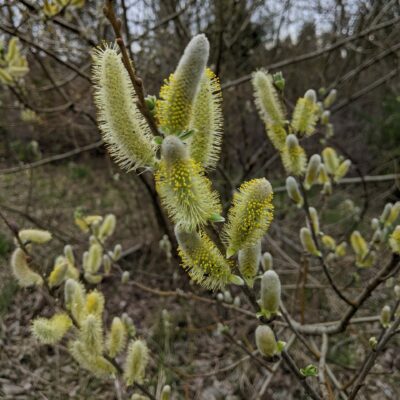 At GPC’s Klingel-Bryan-Beard Wetland Wildlife Refuge near Belfair, we’re finding willow flowers! This member of the Salix genus loves the moisture of the wetlands and the bright sunshine out on this preserve. Take note – the “flowers” on its catkins are all male, and their stamens are topped by pollen-producing anthers. This particularly tree will only display the male catkins. Like every other species in the Salix genus, it’s dioecious – so the male and female flowers appear on separate plants.

Take a guess about which Salix species this is! Is it Bebb’s willow, Salix bebbiana? 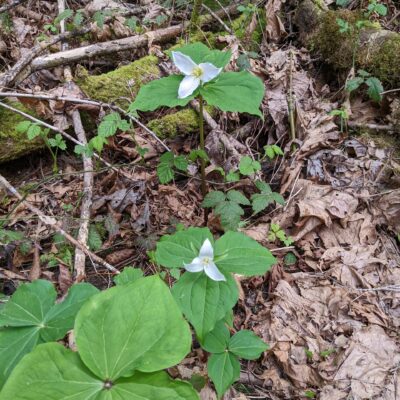 Down at the tip of the Key Peninsula, at GPC’s Johnson South Sound Wildlife Refuge, there’s more to see. Western trillium (Trillium ovatum) has returned. You’ll find this plant by its distinctive pattern of threes – three-petaled flowers with two pairs of three stamens, three calyxes, three stigma, a three-celled ovary; even the fruit has three ribs!

Western trillium is also known as “Wake Robin.” Maybe that’s because it flowers in the same season when thrushes sing their morning chorus. Keep an eye on this flower throughout the season, and you’ll see its pristine white petals turning into a royal purple. 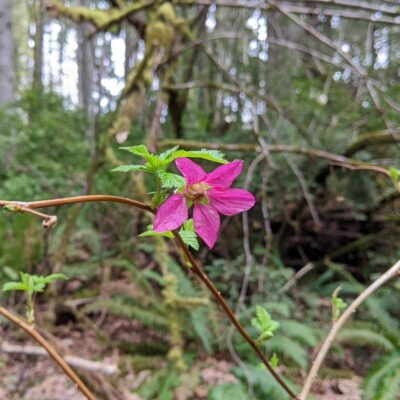 Another flower that you can find in many of GPC’s preserves – that’s the classic salmonberry! Rubus spectabilis is named both for its flowering splendor and also its delicious fruit. Living with salmonberry is a year-long delight!

Springtime is in full swing. Find a preserve that’s open to the public, and see what flowers you can find!