The 119-acre Filucy Bay Preserve sits on both the eastern and western bank of the north cove of Filucy Bay, and safeguards intact intertidal and estuary habitat with mature forest lining its banks. This kind of intact natural habitat is increasingly rare, and led to Filucy Bay being ranked in a 2003 Pentec Environmental study as having the 13th highest nearshore habitat quality out of a total of 413 assessment units in the Key Peninsula, Gig Harbor, and Islands Basin. This intertidal estuary habitat is vital for chinook salmon, steelhead trout, fall chum salmon, coho salmon, and cutthroat trout.

GPC worked with willing landowners to purchase 40 acres in early 2021 and received a generous donation to purchase an additional 9 acres at the end of the year. In April 2022, GPC again worked with neighboring landowners and RCO’s Estuary and Salmon Restoration Program to purchase an 8-acre parcel. In July 2022, the preserve expanded with the donation of two small parcels to the south, which will protect more than 200 feet of shoreline.

GPC is thankful to the many neighbors, community members, and granting partners that have made this growing preserve a reality. Filucy Bay remains a top conservation priority for GPC, and we plan to continue to expand the preserve in the coming years. 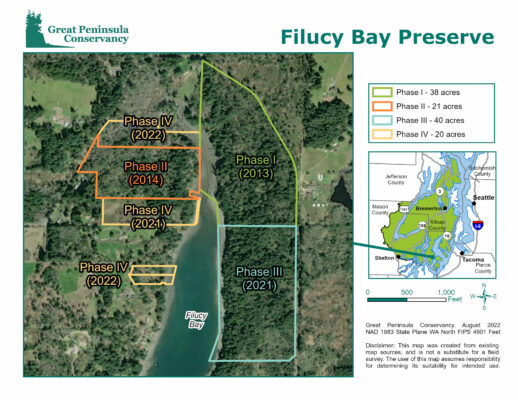 Last month, Great Peninsula Conservancy hosted our first volunteer event since the pandemic started… can anyone really believe it’s been a whole year? To kick things off, we created a…