There’s a new forest being made down at the Klingel-Bryan-Beard Wildlife Refuge. This beautiful preserve, which sits on Hood Canal near the Union River estuary, has been the site of a major restoration project. With at least 225 volunteers contributing, this just might be the largest volunteer effort that Great Peninsula Conservancy has ever organized! 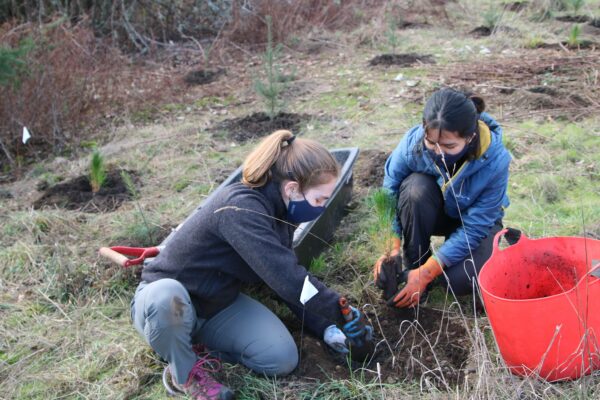 A few decades ago, what is now a beautiful stretch of salt marsh was diked off from Hood Canal’s tidal ebbs and flows, and used as pastureland. Since its protection by GPC the dike has been removed and the salt marsh is returning to its natural state of balance.  The Union River estuary was singled out in the Hood Canal Coordinating Council (HCCC) Priorities and Immediate Needs document as highly important for endangered Hood Canal summer chum salmon. This restoration project addresses a need identified by the HCCC for the Union River watershed: to restore riparian buffers. Overlooking the salt marsh on either side are stretches of upland, which had been colonized by invasive Himalayan blackberry and Scotch Broom.

Native nearshore vegetation would support the habitat of juvenile summer chum on this vital stretch of shoreline. A lack of vegetation reduces shade and the habitat complexity created by shoreline large woody debris, as well as increase erosion on beaches. By replanting this site with more drought and salt-tolerant species (in anticipation of rising sea levels caused by climate change), this project strengthens the core Union River subpopulation of Hood Canal summer chum. In addition, Lynch Cove and the Union river support Chinook salmon, which seek shelter and food in the shallow, near-shore waters of the estuary. Increasing the habitat quality will contribute to one of Washington State’s Southern Resident Orca Task Force’s goals to support orca recovery in Puget Sound: increasing the abundance of Chinook salmon (the main food source of southern resident orcas).

Controlling and removing invasive species was the first part of our project. Over the course of a few months last summer and fall, 75 dedicated volunteers came out to work on getting these invasive plants out of the way. Now, in the space that has been cleared on either side of the marsh, native trees and shrubs have been replanted. Shore pine, Pacific madrone, Douglas-fir, Oregon oak, Nootka rose, and other native species are returning to the uplands of the Klingel-Bryan-Beard Wetland Wildlife Refuge.

At the end of January, more than 150 volunteers came out to support restoration here in Mason County! The support was overwhelming. People from as far away as Bellevue drove and caught ferries to come out and get their hands dirty putting plants in the earth. Whole families came out to work together and share their love of stewardship. It’s hard work, but it’s worth it – these volunteers planted 5,000 native trees and shrubs. 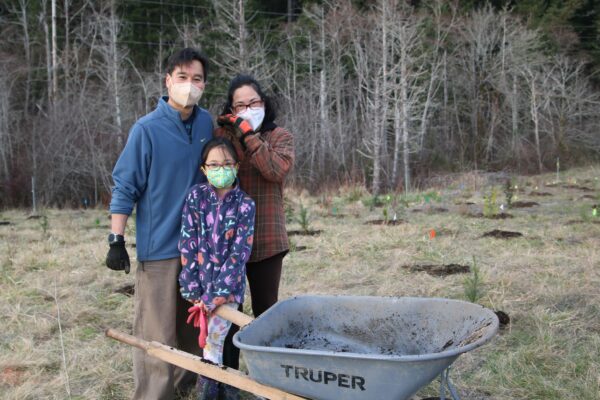 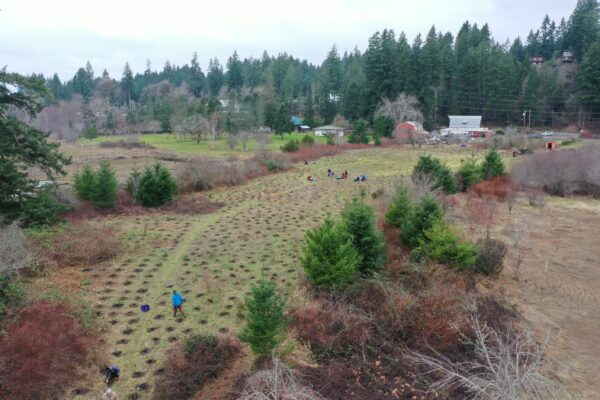 Thank you to the 225 volunteers who showed up for stewardship – the work you’ve put in will have a transformative impact on this landscape. As these native trees and shrubs grow over the coming years and decades, they’ll form a new forest with a rich diversity of species, creating new habitats that support native wildlife, and bring clean water to Hood Canal. 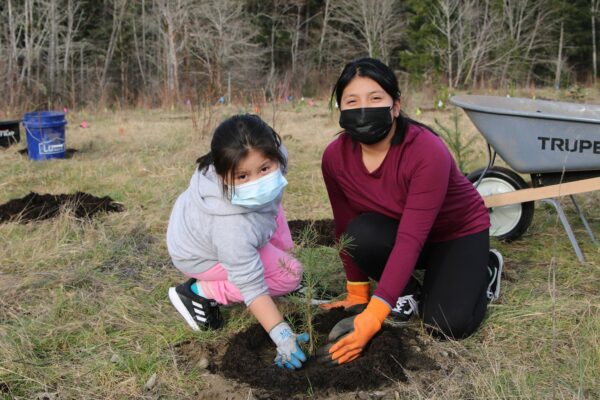 This wasn’t just restoration, though. This project was carried out in partnership with scientists from Western Washington University. Dr. Jenise Bauman and her MA student Chelsea Harris established four study plots across the planting site. Through the lens of the restoration practice assisted migration, WWU researchers are conducting a long-term study to track the growth and mortality of Douglas-fir, shore pine, and Garry oak; plant species that are already native to our planting area. 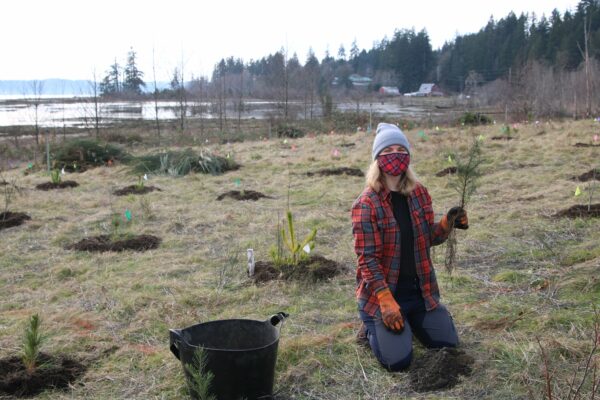 Although individual plants are typically rooted in place in their lifetime, all plant species migrate over the course of generations. They follow the favorable conditions in which they can grow and flourish. Migration like this is something scientists expect to observe over long periods of time – we’re just helping it along (hence assisted migration). Using the US Forest Service’s Seedlot Selection Tool, GPC stewardship staff identified geographical areas that currently have the climate that our planting site is expected to have in 50-75 years.  We used climate variables of mean coldest month temperature and summer heat-moisture index to further define where we should source our seeds from. Based on this tool and our results, the native species planted on Western Washington University’s experimental plots are sourced from nurseries in Humboldt County, California and Curry County / Salem, Oregon.

The forecast for the future of western Washington is hotter, dryer summers, along with more extreme rainfall events in the winter. Over the coming years and decades, scientists from the Western Washington University will study those native plants which were sourced from southern seed zones in California and Oregon, and see if they prove to be better suited to these changing conditions. Subtle differences in their genotype could make it easier for these trees to survive and even thrive in increasingly extreme conditions. 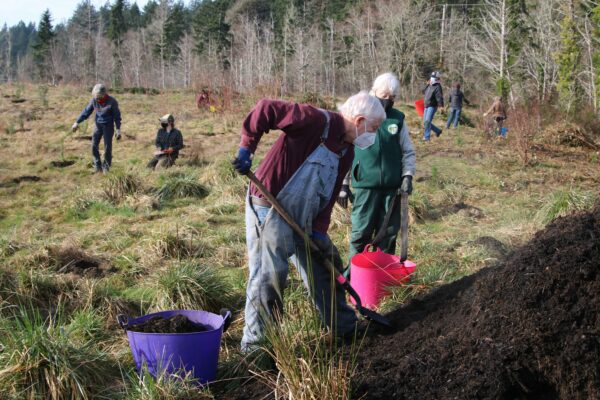 A big Thank You!

The impact of this planting will be incredible. A brand new forest will soon be rising up on the shores of Hood Canal, filled with new life and new possibilities for our region. We have so much appreciation for the 225 volunteers who showed up for conservation and made this effort possible. We’d also like to give a big thank you to the nurseries who helped wrangle us plants: WACD Plant Materials Center (WA), Fourth Corner Nurseries (WA), Sound Native Plants (WA); Brooks Tree Farm (OR); Mattole Restoration Council (CA) who literally met us at state lines to exchange plants, Samara Restoration (CA) who quickly developed a method to ship plants out-of-state, and Bob Vogt (CA), a master Garry oak grower. GPC is also grateful for funding from the Rose Foundation for Communities and the Environment and Puget Soundkeeper Alliance, as well as from the Natural Resource Conservation Service and One Tree Planted. Funding was also provided through partnership with Western Washington University faculty and students in the College of the Environment. 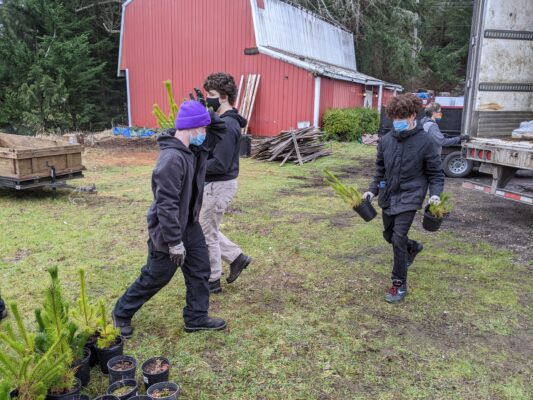 Shout-out to GPC’s Stewardship team for organizing this event: Stewardship Manager Adrian Wolf and Stewardship Associate Micaela Petrini worked around the clock to get the new plants ordered and shipped, and 5,000 holes dug for them, while AmeriCorps VISTA member Hannah McDonough coordinated the outreach efforts that gathered us all together to put them in the ground.

The work’s not done yet!

Getting these plants in the ground is only the first step on their journey. If you want to help out with this project, there are more events at Klingel coming up this spring! We will continue working to control invasive species and monitor the new plants, to ensure their health and success. Sign up for GPC’s e-newsletter or keep an eye on our Facebook, where we’ll be announcing these events. Participating in a stewardship event today will make a huge difference on what our world will look like tomorrow. 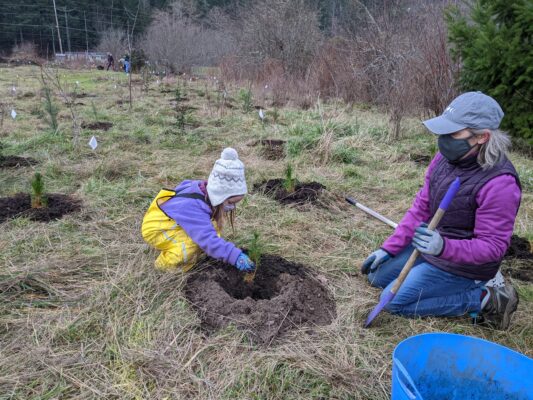